Mass Incarceration. The New Jim Crow. The War on Drugs. Thanks to Professor Michelle Alexander these phrases are now intimately linked in the minds of social justice advocates and faith leaders as we begin a critical struggle for fairness, justice and human rights in the criminal courts, police precincts and prisons of America. The Next Movement is convinced that America can do better, and that the majority of Americans would want us to do better, if they knew the truth. The truth ─ about systemic incarceration, structural second class status, completely uneven law enforcement practices, oppressive and selectively enforced laws ─ that is filling the prisons of America.

Only YOU Can Prevent the Coming Police State... 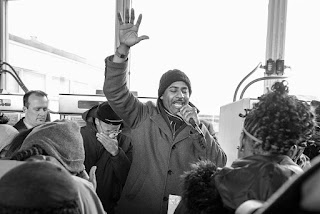 Over the past few years we have witnessed police abuse of power on a visceral level unknown throughout our history. The almost universality of the camera phone, the increased use of police dashboard cameras, and the early implementation of police body cameras, have brought the public right into the midst of police/public interaction.

The murder of Laquan McDonald, shot 16 times by a Chicago Police officer, and the attempted cover up, caused the resignation of Gerry McCarthy, the police chief of one of the largest departments in the country. And soon after, the defeat of powerful Cook County States Attorney, Anita Alvarez. Many suspect that Mayor Rahm Emanuel will also be unable to wipe the blood of Mr. McDonald off in time to save his next election bid.

Lest we sleep, police unions, and "law and order" politicians are, of course, fighting back. Oh, that they would be fighting back with better oversight, removal of criminal police officers from their rolls, renewed programs to build relationships with the communities they serve, or an end to racial profiling and "stop-and-frisk" citizen stops. What a blessing this would be!

But no, instead, they are digging in, as an occupying force would be expected to do.

One of the local efforts has been the so-called Blue Lives Matter ordinance, led by Alderman Ed Burke. Essentially, this is an example of overkill, and as University of Chicago Law Professor, Geoffrey Stony said, ". . . why do we need this new law? Other than the symbolic dumping on Black Lives Matter, which is ugly." #BlackLivesMatter and many other millennial infused justice organizations have proven effective in fighting for basic human rights in America, and as such are being targeted by our increasingly racist government administrations - it will only get worse.

Nationally, there are at least 10 states that are working to criminalize protests. For example:


These actual, and prospective, laws are designed to limit our right to protest, to silence the people. 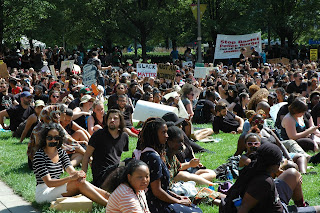 Instead of focusing his efforts on the causes of violence in our communities, this order calls on the Department of Justice (now led by ex-senator Jeff Sessions, a man viewed as too racist to serve as a judge) to work with other federal agencies (FBI, NSA, Homeland Security, etc.) to "develop an executive branch strategy to prevent violence against Federal, State, tribal, and local law enforcement officers."

From our local politicians to state politicians across the country, to president #45, there is a concerted effort to stifle free speech and our right to assemble in defense of our rights and the constitution.


Over the coming days, weeks and months you will hear of protests, petitions, boycotts, letter writing campaigns, etc. Don't leave it up to your neighbor to respond!

P.S. Thank you to the elected Community Police Accountability Council for continually sharing content relevant to the fight, much of it used in developing this note.

Posted by The Next Movement at 1:34 PM

The Next Movement
Comprised of a diverse group of justice advocates, The Next Movement sees mass Incarceration in America as the key human rights issue of our time and we are committed to educating our communities on the issue, and working together with like minded organizations and people to build the mass effort that will be required to end this systemic injustice.